There are stringent legislative policies now in place across the European Union (EU) to curb harmful emissions, so that future generations will be able to enjoy cleaner air and irrevocable damage to the environment can be prevented. At the same time increasing effort is being made to reduce our dependency on the planet’s dwindling oil reserves.

These dynamics both point towards a migration away from automobiles based on combustion engines alone and heavier use of hybrid and electric vehicles (HEV/EVs). So far there have been obstacles that have prevented widespread HEV proliferation from taking place however. This insight will look at what can be done overcome them.

It has already been possible to address carbon emission levels through better air management and thermal management systems. The European Union's 2015 target for average fleet emission levels already being reached by 2013. This has allowed a certain degree of engine downsizing to be benefited from. The next major step toward further decline in carbon dioxide (CO2) output will be through greater prevalence of electrification and hybridization. Through this it is possible to reduce the load on the engine (through more on-demand systems) and optimize the combustion engine efficiency.

The electrification of cars is ongoing trend that cannot be stopped. It has already formed the basis of many established elements of modern automobile design. For example, the replacement of hydraulic steering mechanisms with electric power steering has led to significant reductions in CO2 emissions (as much as 5% in some models). Through uptake of HEVs, things can be taken much further.

Although at the start of this decade some automobile manufacturers still doubted their validity, commercial acceptance of HEVs is now being witnessed across the globe. The importance of this segment within the automotive market is increasing all the time. Industry analyst firm Freedonia has predicted that worldwide hybrid and electric vehicle (HEV) sales will more than double between now and 2018. Currently Japan leads the way with regard to the endorsement of HEVs (representing over 20% of its annual vehicle sales). This is followed by North America, then Europe (though in both of these cases the percentages are far lower).

The various types of different HEV that now exist include: micro hybrids, mild hybrids, full hybrids, plug-in hybrids and electric vehicles. It must be noted that micro hybrids are not counted within the true HEV segment they are a mere reinforcement of the starter and its combination with the alternator. There is no e-Powertrain involved.

Vehicle manufacturers are looking at various different ways by which they can downsize engines and bring about the emission reductions now being expected. Turbos have long been able to optimize the efficiency of conventional combustion engines as part of their air management function (with lower CO2/km figures resulting). This is accomplished by using high temperature compressed exhaust gas to drive the turbo's secondary "cold side" circuit, compressing the air intake for the next combustion cycle. Combinations of exhaust gas can also be fed into the secondary side air intake in exhaust gas recirculation (EGR) systems, allowing compliance with the strictest of emission standards - such as those concerning nitrogen oxides (NOx), the other pillar in the cleaner air mantra. One of the handicaps that are intrinsic to turbos is the lag in their response. They only kick in only after a certain RPM threshold has been reached. Even with optimizations such as variable geometry turbines (VGTs) which maintain the optimal aspect ratio as a function of the RPM, the lag can never be eliminated. Preferably this effect would not be present and the turbo would work continuously at any RPM. One way of overcoming this particular technical limitation is through use of an electric supercharger. Here compression of the air intake is not achieved via the exhaust gas' high pressure, but through employment of an electric motor which is effectively ‘on demand’, with no lag to worry about.

It is generally accepted that all cars will eventually, at the very least, have start/stop functionality. Nonetheless start/stop alone will not pave the full road to the 2020 targets being carved in legislation. The hybridization/electrification needs to be brought to the next level.

Full hybrids normally rely on a 40kW to 70kW electric motor, which works in tandem with the vehicle’s combustion engine. Some of the most prominent examples of full hybrid vehicles are able to reduce CO2 emissions compared to equivalent combustion engine models by as much as 35%. The electric motor incorporated will, in most circumstances be in operation for the whole time that the vehicle’s engine is running, or at least up to a certain speed. This mandates the specification of a large, cumbersome and expensive battery pack, so as to have the high voltage required for high power electric motors that enable a fully electric drive. Additional on-board charger electronics are required for the plug-in hybrids and the associated energy storage necessary to cover an extensive mileage.

Alongside full hybrids, plug-in hybrids and electric vehicles, a new category of HEV has started to appear. These HEVs are referred to as mild hybrids. Mild hybrids possess greater functionality than stop-start systems or micro-hybrids. In most respects these vehicles have more in common with conventional combustion engine based vehicles than they do with HEVs. What differentiates a mild hybrid from a full hybrid is the fact that their electric motor is not responsible for propelling the vehicle on its own, with power ratings in the range of 5kW to 20kW. The vehicle’s combustion engine takes care of this, with the electric motor just there to provide additional support, the so-called torque-assist. This approach allows in the region of 10-15% improvements in fuel efficiency, whereas full hybrids can easily double that. With mild hybrids, car makers still have the goal of further minimizing engine size as much as possible and delivering emission reductions, with , and the benefits of lower wire harness weight, wire harness cost reduction and no longer needing to comply with the high isolation standards of high voltage batteries are to be derived. At the same time ensuring that strong levels of performance are maintained and driving experience is unaffected. To this end it is necessary to deliver an electrical boost along with kinetic energy recuperation function on a lower voltage net than full hybrids.

Mild hybrids may not be able to deliver degrees of fuel efficiency that are comparable with full hybrids - they do, however, enable marked improvements on conventional combustion engine vehicles and also offer consumers more attractive price points. While a full hybrid will add a Euro 3000 to Euro 4000 premium to the cost of vehicle model in a given category, a mild hybrid will only add around Euro 1000 - as it does not require the same quantities of battery power capacity and power in general. For this reason IHS Automotive predicts that by 2020, around 15% of all HEV production will be for mild hybrids.

So far mild hybrids (along with micro-hybrids) have seen most traction here in Western Europe. It looks likely for the next few years that the European market will constitute nearly half of the total global sales for this particular HEV category. If the power goals that are being set by mild hybrid inverters are to be reached with a 48V system, there is no question that currents will be pushed way beyond the 200A mark.

The considerable expense of inverter hardware has to some degree restricted HEV adoption, with government subsidies or other incentive schemes (such as no road tax on hybrid vehicles in Japan and free license plates in Shanghai which are otherwise valued at several thousands of dollars) often being relied upon to make them more appealing to car buyers. The use of smaller inverters with lower power losses would make it possible to significantly reduce the costs that relate to HEVs. This would have a big impact on the commercial success of HEV models - lowering their price tags, as well as reducing their overall weight. It would, in turn, mean that these inverters exhibit much higher power densities and this would therefore have implications for the current sensing technology employed.

In order to address the larger currents that characterize the present and future HEV designs, Melexis has added a new device to its IMC-Hall® family of programmable current sensor ICs. Targeting very high field applications, the AEC-Q100-qualified MLX91208CAV complements the company’s widely deployed low field (CAL) and high field (CAH) devices. It can cope with currents exceeding 1000A. These current sensing devices are housed in space saving surface mount standard SOIC8 packages. It allows them to support the miniaturization of inverter designs that the HEV market in general is now demanding. 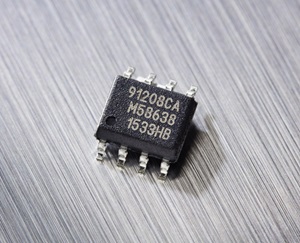 The proprietary integrated magnetic concentrator (IMC) mechanism employed by MLX91208 series sensors can accurately measure current without the need for inclusion of bulky external ferromagnetic cores. This results in the implementation of sensing solutions that are much more compact. The innovative IMC structure concentrates the applied magnetic flux density parallel to the sensor IC surface and the fringe fields in the center - which are proportional to the applied current - are sensed by the more efficient horizontal Hall plates.

In essence the IMC is a ferromagnetic thin film alloy deposited on the silicon surface in a wafer post-processing step. There are numerous advantages which stem from this – most importantly that the IMC is able to generate magnetic gain, which is beneficial for the signal-to-noise ratio (especially when compared with vertical Hall plates). Furthermore, effects such as hysteresis are minimized by use of high-quality alloys in a wafer level post-process (WPP): having a concentrator realized in WPP is substantially more cost-effective than having a bulky external concentrator of the same material grade. Also an integrated concentrator does not require complex assembly processes. To combat the crosstalk generated by parallel current conductors in close vicinity, magnetic shields accompany IMC-Hall sensors. Their inclusion is far more preferable than cores that would otherwise be required in the current sensing mechanism (which are bigger, heavier and add significantly to the total system cost). Also U-shield arrangements allow vertical stacking and as such offer considerably easier assembly.

By utilizing this technology, the Melexis MLX91208CAV provides a fully cost-effective, monolithically-integrated, easy-to-assemble contactless current sensing mechanism that meets HEV requirements. This device intrinsically delivers the galvanic isolation that is obligatory in high voltage applications, while simultaneously eliminating the additional sources of power loss that are found with shunt technology, especially in high current applications due to the squared relation between power losses and current.

Advanced 48V hybrid systems, such as the ones discussed in this article, are destined to present modern society with a credible way by which to save fuel and lower vehicle emissions without requiring major financial investment by consumers. The relatively high cost of automotive inverters have until now held back wholesale HEV adoption to some extent. Consequently, there is heightened interest in finding ways by which inverters can be downsized. The emergence of the mild hybrid subdivision of the HEV sector is allowing car buyers to derive some of the benefits of hybridization without being exposed to the higher costs that are normally associated with it. Vehicle manufacturers can avoid the cost and weight penalties that come with full hybrid designs while still improving fuel economy. Through use of more compact electric motors and smaller less capacious batteries, these vehicles will be able to gain a competitive edge in the HEV market. The support of next generation component technology will allow the higher power densities and elevated temperatures that define such implementations to be attended to.