According to Cisco in the year 2004/5, there was one "thing" per person connected to the "Internet of Things" (IoT). Estimates suggest there are now three to four IoT devices per person. A realistic and recent forecast from ABI predicts 36 billion IoT devices by 2020 comprising 19 billion nodes, 11 billion gateways and 6 billion mobile devices. The McKinsey Global Institute estimates revenue will be between $4 and $11 trillion by 2025. Clearly, the IoT is a major part of the future.

A large proportion of IoT activity is machine-to-machine (M2M) between nodes. Data is generated, interpreted, stored and acted upon without human intervention. Each node is an identifiable embedded computing device that will facilitate automation of daily life and enable advanced applications. By 2020, estimates suggest that white goods and HVAC systems will outnumber computers on the Internet.

The IoT relies on communication for its very existence and with many sensing devices being placed remotely, wireless communication is a key enabler.

As applications move to wireless, the radio spectrum is used extensively and bandwidth availability is crucial to the IoT. Each smart IoT node senses and performs signal processing and conditioning, such as filtering signals from noise to reduce the bandwidth needed. IoT sensors commonly communicate with a gateway from where data is routed to centralized storage that securely protects, stores and processes the data.

Both Sub-GHz or 2.4GHz radio can be used as a carrier for data communication within the IoT. 2.4GHz is typically Bluetooth Low Energy (BLE) or Wi-Fi. Sub-GHz refers an ISM band (433.92MHz or 868.3MHz). 2.4GHz systems offer several Mbps data throughput with Wi-Fi and around 260 kbps for BLE. Wi-Fi connects directly to the IoT, whereas BLE connects via a mobile device. 2.4GHz has a short range (<10m) due to the high propagation losses.

Analog RF transceivers and receivers include phase-coincidence demodulators that employ a discriminator circuit or an integrated FSK demodulator. Using the analog demodulation principle, they have a carrier frequency acceptance range (CFAR) up to ±100kHz.

In an IoT transmitter with 868.3MHz carrier frequency based upon a ±50ppm tolerance crystal, the centre frequency can spread by ±43kHz, possibly exceeding the FSK deviation that is typically ±10kHz to ±50kHz for IoT sensors. RF products with analog demodulators can cope with wider spreads due to their wide CFAR.

As the IoT grows substantially, manufacturers will come under price pressure, reducing costs with each product generation. This will entail using wide-tolerance, low-cost crystals in the sensor nodes. 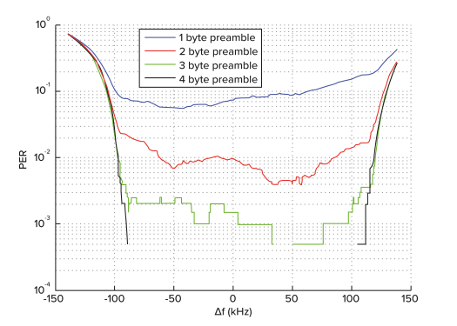 The MLX73290-M features a 5mm x 5mm 32-lead QFN package and a temperature range from -40°C to 105°C. It operates from a 2.1 to 3.6V DC supply and includes a 60Hz resolution PLL synthesizer, a 256byte FIFO that can be split 128/128 for RX/TX use and 4 programmable GPIO ports for system interfacing. Energy harvesting using a solar cell and supercapacitor allows battery-less operation enhancing value in remote locations.

With its carrier recovery feature, the MLX73290-M can tolerate carrier frequency deviations ±2x the raw data rate (DR). CFAR is not dependant on the AFC setting as AFC simply enables convergence after each packet reducing the preamble, if losing a few packets is tolerable in the application. There is a trade-off between preamble length and the Packet Error rate (PER).

As the IoT grows substantially, manufacturers will come under price pressure, reducing costs with each product generation. This will entail using wide-tolerance, low-cost crystals in the sensor nodes. To achieve this trade-off, the MLX73290-M with its wide CFAR will become a popular solution.