The MLX81130 is a fully integrated smart automotive OLED driver with high-speed robust communication MeLiBu® between multiple LED drivers, making it best suited for applications such as RCL and OLED small displays.

The MLX81130 integrates all the components needed to drive up to 25 OLEDs with their current regulated and programmed up to 30mA (per channel). For even more current, it is possible to bridge outputs.

The MLX81130, coming in a QFN32 5x5 package, also provides a communication interface allowing the development of powerful and cost-optimized animated light systems. Its compatibility with other MeLiBu® ICs allows the usage of LEDs and OLED together in the same application. ASIL-B grade applications are supported thanks to the MeLiBu® communication system. 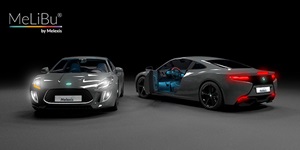