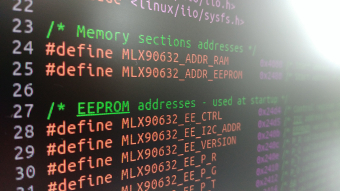 Melexis has contributed and maintains a driver for the MLX90632 infrared (IR) temperature sensor into the Linux Kernel v4.17, which is one of the most used operating systems on embedded devices, Internet of Things (IoT) devices and mobile phones in the world.

The inclusion of the MLX90632 driver in the Linux Kernel offers an easy interface for all software developers on Raspberry Pi, BeagleBone, ODROID, Intel Edison and other embedded systems that run Linux (or Android) and have an I2C interface.

Acquiring object temperature is as simple as reading a file with any programming or scripting language. As a bonus the MLX90632 driver also provides the ambient temperature that can be used as a normal temperature sensor for hardware monitoring or other applications. Melexis will support and maintain the driver in the future as part of the temperature sensors of the Industrial IO subsystem. Measuring temperature in a non-contact manner has never been so simple and accurate.

Melexis is a proud contributor to the open source community with a lot of drivers, tools and code already released and actively developed under open source licenses. We continue to help people with easier and faster solutions to their problems and with the development of their ideas.