As we become more conscious of our health and our environment, temperature sensing is becoming increasingly relevant. As a result, it is a function now being added to many devices, including health monitoring devices in the form of medical body thermometers and smart wearable devices.

Non-contact temperature sensing relies on detecting energy emitted in the infrared (IR) wavelength region. Every object emits energy in this way, which can be measured to calculate its temperature. However, as the sensing devices behind this get ever smaller, they become more susceptible to the impact of thermal shocks, which can induce measurement error and thermal noise.

In this technical article, Melexis will discuss some of the principles behind non-contact temperature sensing as well as the approaches used to minimize the effects of thermal shock. The article will then look at a new and intelligent approach to eliminating the effects of external thermal disturbances in micro-miniature sensors.

Thermopile temperature sensing technology is increasingly being used in medical (including home healthcare) and industrial applications (like infrared temperature gun), as it is robust, accurate and reliable. A thermopile is simply an electronic transducer that converts thermal energy into an electrical signal and works on the principle that everything emits thermal far-infrared (FIR) radiation.

Electrically speaking, a thermopile is comprised of several thermocouples connected in series. Together, they generate a voltage that is proportional to the temperature difference between two points; this difference gives a relative temperature measurement.

Making the reasonable assumption that for non-metallic materials the emissivity (η) is approximately 1, the surface temperature can be tied to emitted power.

Temperature sensing is becoming increasingly useful in a number of applications, and as a result this functionality is being added to many devices including health monitors, and wearables such as smart glasses, smart wristbands and devices worn inside the ear; so-called “hearables”. However, contact thermometer solutions often suffer from poor thermal contact with the site of interest. Non-contact temperature sensing using the FIR principle is ideal for these new applications, all of which share a common need for ever-smaller temperature sensors. 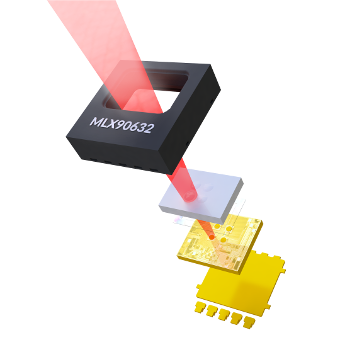 In order for FIR temperature sensors to be incorporated into wearables, the technology has to be miniaturized. While miniaturization has many benefits, it also comes with its own challenges; with this type of sensor, miniaturization can have a negative impact on the accuracy of the temperature measurement.

As outlined above, FIR temperature sensors are affected by thermal gradients - or thermal shock - caused by the sensor chip receiving radiation from multiple sources while only a limited amount of that radiation actually comes from the object being measured. Other sources of thermal energy include the sensor’s own package – meaning that some of the signal generated is useful, while some is parasitic. In isothermal conditions, where the membrane temperature matches the package temperature, there is no parasitic signal, and the differential nature of thermopile technology cancels out the effects of package radiation. However, in many applications maintaining the sensor in isothermal conditions is impossible.

If the small FIR sensor is mounted on a PCB it can be exposed to thermal energy from nearby heat-generating components, such as a microprocessor or power transistor. Manufacturers of FIR sensors have attempted to overcome this issue by placing the sensing element in a large metal can, such as a TO-can package. The significant thermal mass and high thermal conductivity of the metal does address the effects of rapid thermal gradients and shocks to an extent, but is found to be less than adequate in a thermally dynamic environment. Of course, the other challenge is that TO-cans are relatively large and not suitable for small devices such as wearables and hearables.

Clearly, the TO-can solution is not appropriate for next-generation health monitoring devices and, for that reason alone, must be discarded in favor of a solution that can better address the challenges of using small-size FIR sensors. 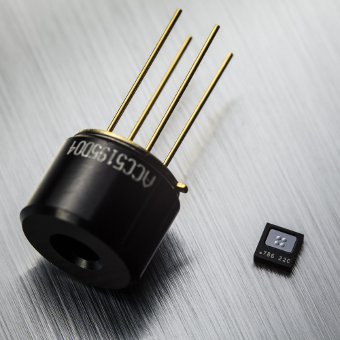 By modeling and characterizing several scenarios and applying this data through sophisticated compensation algorithms, it is possible to modify the output of modern small FIR sensors such that they effectively become insensitive to thermal shock.

One of the latest devices to reach the market is the small-size MLX90632 FIR sensor from Melexis. This is a non-contact infrared temperature sensor in a small SMD QFN package and factory calibrated for ambient temperatures between -20 °C and 85 °C.

The measured temperature value is the average of anything which is within the 50° field of view (FOV) of the sensor and, using this measured value along with the calibration constants and the sophisticated on-board compensation algorithms, the ambient and object temperatures can be calculated.

To demonstrate how effective the active compensation is, Melexis conducted an experiment in which an MLX90632 sensor and a state-of-the-art (TO-can packaged) sensor were set to measure a stable reference source with a temperature of around 40 °C. While the measurements were being performed, a strong heat source was placed in close proximity to the sensors - the results can be seen in Figure 2. 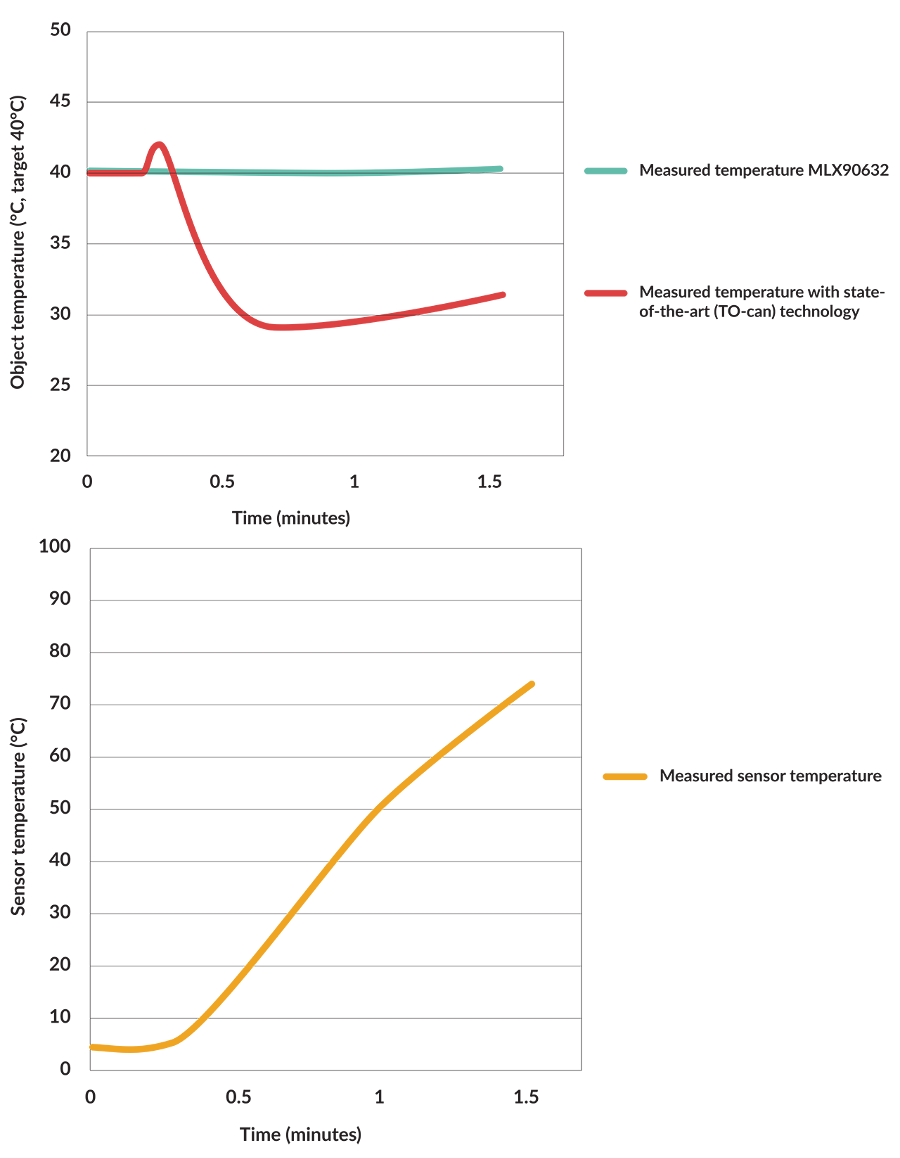 Figure 2: Results of thermal shock testing on the MLX90632

The graph shows that the reference was indeed at a temperature of 40.05 °C and the sensor temperature around 2 °C at the start of the experiment. As the heat was applied the sensors were then subjected to a thermal shock (of approximately 60 °C/min) and the output was monitored. During the entire test, the temperature reading of the MLX90632 did not deviate by more than 0.25 °C, showing a very stable performance. This was achieved thanks to the advanced compensation algorithm. The TO-can sensor shows a significant error, illustrating that these devices do not perform well in such challenging conditions.

The ultra-small sensor contains a thermopile that captures the energy emitted by the object, as well as an element to measure the temperature of the sensor itself. The thermopile sensing element voltage signal is amplified, digitized and digitally filtered before being stored in the on-board RAM. The reading from the on-board reference temperature sensor is processed and stored in the same way.

A state machine controls the timing and functionality of the sensor, and the result of each measurement and conversion is available to the wider system (e.g. microcontroller) via the I2C communications interface.

The temperatures (object and internal sensor) can be calculated from the raw data by using a simple microcontroller.

Firstly, the sensor element has to be small enough to fit within the application and secondly, it has to be fitted in a large metal case to give sufficient thermal capacity to mitigate the effects of rapid thermal shocks.

Based upon thermopile sensing technology, the MLX90632 from Melexis addresses this seemingly impossible challenge. Through the use of on-board active compensation and sophisticated algorithms, the MLX90632 can demonstrably provide accurate temperature measurement in the most demanding situations, while being housed in an ultra-small SMD package.